Over the past couple of years there has been a great deal of research which has found that the bacteria naturally found on, and in our bodies is not only important to our general health, but that keeping our gut bacteria “happy” seems to be important in preventing cancer.

Research funded by The Eve Appeal and EC Horizon 2020, led by Prof Martin Widschwendter and his team at UCL, is now starting to uncover the importance of our vaginal bacteria too!

We all naturally have bacteria in our vagina, and it is this bacteria that creates an acidic environment, i.e. the pH balance we hear so much about. This natural pH not only keeps our vagina in a healthy state, and thrush at bay, but it prevents “bad” bacteria, that we definitely do not want, from travelling further up our gynaecological tract to our womb and ovaries.

Existing evidence shows that when we contract infections from this ‘bad’ bacteria, that then travels further up our gynae tract, they can cause a number of problems, often starting with “Pelvic Inflammatory Disease”. It would appear that this infection that causes inflammation in our womb and Fallopian Tubes, can cause problems with infertility, premature labour, and now possibly cancer. 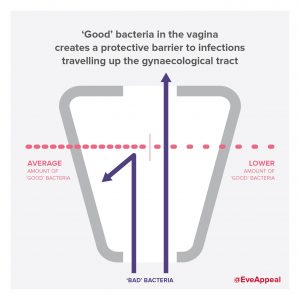 The team analysed the genomes of the bacteria and found, as expected, that the majority of bacteria in a woman’s vagina are of the type called ‘lactobacilli’. Lactobacilli is the natural ‘good’ bacteria we need to keep our pH balance just right. Women who had been diagnosed with ovarian cancer had much less lactobacilli in their vagina than women who had not been diagnosed.

The team also found that women at a higher risk of developing ovarian cancer, from having the BRCA1 gene mutation, also had much lower levels of these ‘good’ bacteria.

It now seems that our vaginal bacteria, and the low pH they create, may not only be important in keeping our vagina clean and thrush free, but may also contribute towards preventing “bad” bacteria causing health problems which could potentially lead to the development of ovarian cancer.

As with all cancers, there are multiple factors contributing towards ovarian cancer development, and the likelihood of any one woman being diagnosed with this disease. Prof Widschwendter’s research adds another piece to the jigsaw with respect to the probable causes of ovarian cancer, which may, in the hopefully not too distant future and with more research, mean we will be able to more accurately predict a woman’s likelihood of developing ovarian cancer.

If we can more accurately predict a woman’s risk of ovarian cancer, it means we have more of a chance to prevent the cancer from starting in the first place, one step closer to Eve Appeal’s mission!

Prof Widschwendter and his team will now start to investigate whether the amount of ‘good’ bacteria is also reduced further up the gynae tract in the Fallopian Tubes, and if, very excitingly, replacing ‘good’ bacteria in the vagina can lower a woman’s chance of developing ovarian cancer.

Thanks to this new research, it seems the natural bacteria in our vagina are more important than we first thought, and may prevent the development of ovarian cancer, and in the not too distant future we might have exciting new ways of understanding our risks, and hopefully reducing them!