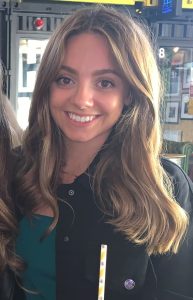 I’d started to experience symptoms almost a year before which I put down to stress, but my gut told me to get them checked. I was sent for tests ‘just in case’. To be honest, I didn’t think that cancer was even a remote possibility. I was young, fit, and healthy.

When the surgeon told me I had cancer I was in complete denial. I refused to accept the severity of my situation.

To make it worse, the doctors were saying things like ‘we don’t know the best approach’ and ‘experimental treatment’.

Imagine, the people who have your life in their hands telling you they don’t know the answer.

The first thing I did was try to find information and other people in the same situation. It was difficult, there’s little research and that didn’t give me much hope.

I remember wishing that I had a more common type of cancer. Nobody should have to think that.

I was so lucky that my concerns weren’t dismissed as ‘women’s problems’ and that I was diagnosed early. It’s so important to catch all gynae cancers early, but especially mucinous ovarian cancer. I know many aren’t so lucky. I am eternally grateful to my doctor for her swift action.

As far as I know my treatment was successful, but I am left with scars that remind me every day of my cancer journey. Regular scans mean I live in constant fear of recurrence.

Since my diagnosis I’ve been determined to create change for other women with a gynae cancer.

And you can help too. We all have women that are important to us, whether they’re sisters, daughters, granddaughters, family, or friends. And by donating today you can join me in helping to protect them from gynaecological cancers.