For Gynaecological Cancer Awareness Month in September 2014 we undertook research amongst women aged 16 – 65. Lots of our partners (supporters, clinicians, other charities, corporate supporters, women’s networks) help us spread this important message: women should know their own bodies, be able to talk without embarrassment about gynae signs and symptoms, and above all, call a vulva a vulva (and not a flower, fairy or tuppence).

That is why, back in 2014 we decided to call for women across the UK to ensure that ‘vagina’ was part of their vocabulary; after a survey showed young women were less educated than their elder counterparts about the symptoms and issues around gynaecological cancers; and worryingly, more embarrassed to discuss them than older women.

Perhaps most shockingly, it’s the language of gynaecological health that proved to be a major barrier to young women opening up about concerns around gynaecological cancers, with 65% saying they have a problem using the words vagina or vulva, and nearly 40% of 16-25 year olds resorting to using euphemisms like ‘lady parts’ or ‘women’s bits’ to discuss gynaecological health.

Vulva is NOT a swearword and we must use the correct anatomical language.

It was also apparent that a lack of basic anatomical knowledge was also an issue, with women in the younger age groups struggling to correctly identify the five areas that can be affected by gynaecological cancer (womb, cervix, ovaries, vagina and vulva) on a simple diagram – just half of women aged 26-35 were able to label the vagina accurately.

This set alarm bells ringing at The Eve Appeal and certainly got a lot of people talking, including the media who extensively covered the story from national newspapers such as The Daily Telegraph and The Daily Mail to the likes of Cosmopolitan.

But we weren’t about to keep quiet about gynaecological issues, as we pushed awareness through the roof for Cervical Screening Awareness Week and Ovarian Cancer Awareness Month in the early stages of 2015. We even held tea parties with valued supporters, MPs and celebrity supporters at the House of Commons all in the name of raising awareness of ovarian cancer which included Denise Welch pledging her support to the campaign in the media – whilst our amazing supporters also made Time for Tea throughout the whole of March!

We wanted to keep the heat up on gynaecological cancer awareness raising in September for Gynaecological Cancer Awareness Month 2015 – we decided it was time to encourage women to open about gynaecological health and have frank and honest conversations with close family, friends and perhaps most importantly, healthcare professionals.

The campaign focused on the fact that there is an apparent lack of knowledge around the signs and symptoms of gynaecological cancers, leading to inaccurate assumptions about the links between sex and cancer; and a sense of a greater stigma around gynaecological cancers than other forms of the disease. Our work also worryingly highlighted the fact that women are not addressing on-going gynaecological health issues due to misconceptions about who is at risk; often dismissing these signs and symptoms of just a natural progression due to their age. Our CEO, Athena Lamnissos felt so passionate about the issue that she blogged about why it was Time to Open Up for Gynaecological Cancer Awareness Month and why women everywhere should talk about vaginas.

We gained wide-spread media coverage for our campaign about opening up – putting a spotlight on the fact that embarrassment and lack of knowledge was literally putting women’s lives in danger – a message which struck a chord. The likes of The Guardian and The Independent carried articles from our media spokespeople and case studies who told their own personal accounts of a gynae-cancer diagnosis to appearing on the likes of Lorraine, London Live and Sky News.

This set us on our way to think how best we can continue our mantra of straight-talking about vulvas and vaginas, and making sure women were not afraid to use the correct anatomical terms for reproductive body parts – and we will continue the fight against, often unhelpful euphemisms – as we encourage women to #KnowYourBody and continue to raise awareness of gynaecological cancers. 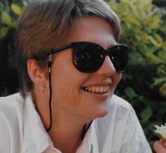 ‘I miss Judith more than words can possibly describe, but I know through this book we might make a difference to someone’s life.’

Cathryn writes about losing her partner Judith to ovarian cancer and why she has released a book in her memory.

﻿
Coronavirus pandemic: We’re experiencing a substantial increase in calls to our Ask Eve cancer information service. You can make sure women suffering with symptoms or who are facing a cancer diagnosis continue to get the answers and support they need by making a donation today.
Donate Now
This website uses cookies to improve your experience. We'll assume you're ok with this, but you can opt-out if you wish.Accept Read More
Privacy & Cookies Policy