What are gene alterations / mutations?

Sometimes the information in a gene can become altered (sometimes called mutated), and this change causes it to not work as it should.

There are a number of reasons for a gene becoming altered. This can be simply through chance, or because of environmental factors, such as exposure to certain substances, or lifestyle factors, such as obesity or smoking.

Are all gene alterations passed on to children?

A gene alteration does not always pass down to children, if it is a hereditary alteration, there is a 50% chance that a child may inherit it, whether they are female or male. A test is needed to check whether the alteration has passed down or not.

What gene alterations are known to be linked to gynaecological cancers?

Lynch Syndrome is another genetic alteration linked to gynae cancers, it increases the risk of womb cancer, as well as bowel cancer.

Does having a gene alteration mean you need to look out for cancer symptoms?

It could also mean that you may be able to access some forms of cancer prevention on the NHS, such as regular surveillance or risk-reduction surgery. Visit our page on ovarian cancer, breast cancer, and Lynch Syndrome for more information.

What do BRCA genes do?

Everyone has BRCA1 and BRCA2 genes. They are known as tumour suppressor genes as they play a role in protecting us from cancer. They do this by helping to prevent the cells in our bodies from growing and dividing out of control. If there is a significant alteration in either of the BRCA1 or BRCA2 genes, they may lose the ability to protect us from a cancer developing.

What is the risk a BRCA gene alteration will result in a cancer developing? 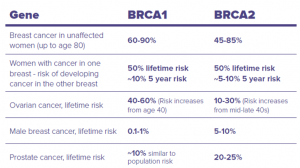 How common are BRCA gene alterations?

What is your risk of a cancer developing if you have Lynch Syndrome?

Here is a table with the cancer risk associated with Lynch Syndrome. 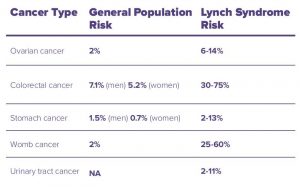