Before I had cancer I was a fit, healthy and active 27 year old. I had qualified as a nurse the previous year, just begun a new staff nurse post, and was due to be married at the end of April 2006. I can’t deny that it was a hefty and unexpected blow. It had never occurred to me that cancer would have to be something I’d have to contend with. Even in the moment which I was given my diagnosis I was in disbelief.

The only symptom I had was irregular bleeding, nothing else. The bleeding started at the end of 2005, in November. One evening, I noticed bleeding after sex, and was a bit alarmed. Having had issues with periods in the past, I assumed it was something similar and put it out of my mind. The next time we had sex, it didn’t happen, so I dismissed it as a one off and happily moved on. But then on the next occasion, it happened again, and every time thereafter. Same thing, bleeding after intercourse. I was a bit perturbed by it, but it didn’t occur to me it could be anything sinister.

I ignored it, and went about my business, starting my new job and planning for my wedding. But then the bleeding became heavier after sex, and I began to have random bleeding after busy days at work. I thought it was probably just related to heavy periods or hormonal changes and ignored it. Then during a conversation on the phone with my sister I mentioned it. She, like me, thought it was nothing to worry about, but suggested that I should just go to the GP and get an antibiotic to sort it out and be done with it. So I did.

Between Christmas and New Year I went to my doctor and explained the situation. She seemed concerned and examined me. She told me there and then something wasn’t quite right, that there was a visible build-up of blood and she referred me for a colposcopy for further investigation.

On the 30th January I attended for my colposcopy, expecting a routine examination and biopsy. The consultant did the tests as expected, she then told me that I definitely had either cancer or the highest level of precancerous cells growing. She then said she couldn’t in good conscience send me away without ‘cutting some of that away’. I wasn’t in shock as such, but I definitely couldn’t process it. I still assumed at that point it would be precancerous, and this was all precautionary. 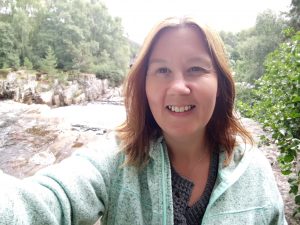 Within 5 days I received a call to go in the following week to discuss my results. As a nurse, I should have realised this wasn’t good, but still I optimistically assumed the least serious scenario. I can still remember the appointment really vividly. The nurse trying to entreat me to bring my fiancé into the office and me refusing because I couldn’t think why on earth they thought I would need him there. I remember the doctor looking at me with pity and telling me I had cervical cancer, grade 4, stage 1B adenosquamous cell cervical carcinoma. I remember sort of half bursting out laughing, then into tears, and then saying right what do we do? All within a split second.

The decisions had all been made. Radical hysterectomy, maybe some chemotherapy just to be sure. All the thoughts of my wedding, dying, and having to tell my parents and family slammed into my brain at once. I suddenly realised I’d never have children. I was completely devastated.

In the following weeks there were scans and blood tests and all manner of poking and prodding, and the doctor who would be performing my surgery phoned me to discuss what would be happening. It’s a phonecall I’ll never forget. He told me my tumour was 2cm long, but had obviously been larger, and the doctor at the colposcopy had probably saved my life. He told me that they had no time to extract eggs, or move my ovaries out of the way, and that if I wanted to take the time to have a baby, I needed to know that I wouldn’t be here to see it grow up. He said if we don’t do this now, you’ll be dead within a year.

My brain went into full survival mode, I thoroughly agreed with what was proposed. Finally, my operation was planned for the 14th March. Only it didn’t happen. Not the way it should have. The growth was so aggressive that on opening me up, they found greater spread into my lymph nodes. They removed the infected nodes and aborted the operation. They said there wasn’t time for me to heal from a major operation, and that I needed chemotherapy and radiotherapy as soon as possible. Four weeks of poking and prodding, followed by ten weeks of chemotherapy, external radiotherapy, and intensive brachytherapy (internal radiotherapy).

We got married in the midst of it all. I survived and I’m still here 14 years later. We have an adopted son and fortunately, I’ve had no recurrence. After a long recovery physically and mentally I’d say I’m as healthy as I can be. When I think back to how long I ignored the bleeding, I feel exasperated. Because an earlier visit to the GP might have made all the difference.

I knew I shouldn’t be bleeding after sex, but I carried on regardless. My advice to anyone would be don’t ignore an unexpected change. If something out of the ordinary happens, get checked. If something doesn’t feel right, get checked. You know your own body, and if something isn’t right, get it checked out. Trust me, a short examination might cause you to blush, but that’s nothing compared to the alternative.

Read our tips on tracking your bleeding to help you get to know your normal, spot when something is abnormal, and seek help.

Join us and Go Red this Gynae Cancer Awareness Month to help raise funds for and awareness of gynaecological cancers.

Sign Up
﻿
Coronavirus pandemic: We’re experiencing a substantial increase in calls to our Ask Eve cancer information service. You can make sure women suffering with symptoms or who are facing a cancer diagnosis continue to get the answers and support they need by making a donation today.
Donate Now
This website uses cookies to improve your experience. We'll assume you're ok with this, but you can opt-out if you wish.Accept Read More
Privacy & Cookies Policy
Necessary Always Enabled