My mother and I were very close, so when she went into hospital to have her gallbladder removed in November 1990 I was pretty worried about her. At the same time, I was relieved to think the pain she’d endured over the previous two years would be at an end.

On November 10th 1990, I left the hospital in total shock. I had been called in by the doctor as I was finishing my visit and told that my mother had Stage Four ovarian cancer and had only three months to live. She was 60 and I was 24.

My father had severe mental health issues, so I was the next of kin. Mum didn’t know about it and Dad couldn’t be told in case it exacerbated his condition.

For three days I kept the news from my parents, and with the support of friends and my brother I held things together. Eventually the doctors told my mum and we were able to bring her home. We then called in our GP and sedated my father so that we could break the news to him.

The last few months of my mother’s life were awful. She had a morphine pump, but it kept blocking and she was rushed to hospital several times screaming in pain. The hospital would get the pain under control and send her home again. Every day was torture as I struggled to work and keep the family going. My mother’s elderly parents were still alive and needed care, and my father was barely coping. My mother was stoic but was being eaten inside by the cancer that had been diagnosed too late for anything to be done to change its tragic outcome. 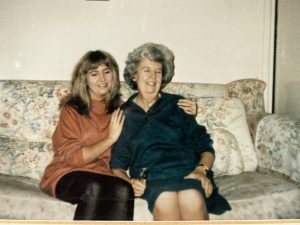 Finally, on March 21st 1991 my mother slipped into a coma and died a day later. Just before she lost consciousness mum was told that the end was near. She looked at me and whispered, ‘I beat it by a month, Sal.’ She had lived for four months rather than the three that the doctor had predicted.

I was a trustee for The Eve Appeal for five years and am still a passionate supporter of their work. The concentration on improvement of early diagnosis is imperative in helping families escape the impact of this awful disease. In the years since my mother’s death, not a week goes by without my thinking about the times that she and I have missed spending together. I think about the bad – my father’s continued ill health, and his and my grandparents’ deaths – and the good – my marriage to a wonderful man who I know mum would have loved, and a successful career in business.

On this the anniversary of my mother’s death my thoughts are with the many families enduring the same awful experience that I did thirty years ago and what we can to do help them. If my mother had been diagnosed even a few months earlier, we might have had many more years together.

Improving early diagnosis of ovarian cancer is an achievable goal. The Eve Appeal works with some amazing scientists who believe they can make it happen, but funding remains the big obstacle. Please join with me to overcome it and give hope to other families like mine.

You can help Make Change Happen this Ovarian Cancer Awareness Month by signing up to either give up a favourite treat or take on 20, 50 or 100 miles throughout the month of March, find out more and sign up today.