When I was 19 my grandmother died of ovarian cancer, it typically presented late, took valuable time to diagnose and unfortunately by that time it was too late for her. That was very difficult for my family and the unfairness has always stayed with me.

At the age of 34, I felt my life was all slotting into place, I had met the man of my dreams, we had bought a family home together and hoped to get married soon. However, I had started to develop unusual symptoms; irregular bleeding after sex and within a couple of weeks I could feel a tiny pea sized lump in my lower abdomen. I knew this wasn’t right and booked to see my GP straight away. Feeling scared, I cried at the appointment and told them that I knew this could be symptoms of many things, but I wanted them to know I had a family history of ovarian cancer.

The GP was great and took my concerns into account and referred me straight away on a two week wait to gynaecology. Due to my age and the bleeding I was initially investigated for cervical cancer which was negative but the lump I felt in my abdomen was quickly growing and I was referred to a further gynaecology team with what was thought to be an ovarian cyst.

The cyst continued to grow rapidly and by the time I met with the second team three weeks later I was bloated, looking pregnant and was starting to get the other more classic symptoms of ovarian cancer – needing the toilet more often and feeling full.  However, my ovarian cancer markers (CA-125) were not elevated and so it was thought I just had an uncomplicated cyst which required abdominal surgery to remove the affected ovary and the Fallopian Tube. The surgery went well, and the consultant reassured me it would be benign and I started on my 6 week post op recovery. 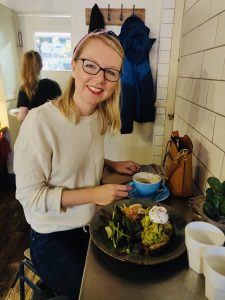 Three weeks after surgery I had a phone call at 8.30am on a Friday morning asking me to come in for a hospital appointment on Monday. I knew immediately it was not going to be good news and my partner and I prepared ourselves for the worst. We knew as soon as we walked into the appointment room and were faced with several consultants and nurses that our fears had been correct. Nothing prepares you for hearing those words; I was told I had endometrioid ovarian cancer, grade two, stage 1c. This was a more unusual type of ovarian cancer that presents slightly differently and thankfully earlier than ovarian serous cancer which is more typical in older women.

Although I was extremely lucky that my cancer had been caught early my first thought was of my fertility as we desperately wanted to have children. We therefore firmly pushed not to go down the standard treatment pathway of a hysterectomy but chose to go down a fertility sparing route and opt for chemotherapy instead. After being told I had cancer on the Monday, on Wednesday I was told by a fertility specialist that it was not recommended to freeze my eggs and that it was likely the chemotherapy would put me in to an early menopause. This was more devastating than the cancer diagnosis and we fought hard for a second and third opinion until I finally found a consultant willing to help us freeze embryos before starting chemotherapy, alongside having Zoladex injections to try and preserve my other ovary during treatment. This delayed the start of my chemotherapy and was an incredibly scary time with very difficult decisions to make that not all our family agreed with.

I got my head down through 5 months of chemotherapy (6 treatments of carboplatin and paclitaxel). I was upset about the prospect of losing my hair so opted for the Paxman machine (cold cap) with some success but lost around 50% of my hair.  Some clever styling and a fab hairdresser have meant not too many people have noticed.

I have had amazing support from family and friends throughout, but it wasn’t until after the treatment finished that everything hit me. I was 34, menopausal, struggling to process everything that had happened and the unknowns surrounding my fertility. It was a very lonely and isolating time when it felt like everyone I knew was becoming pregnant and I spent a lot of time googling for positive fertility stories. I had also lost a lot of confidence and was suffering from anxiety. With some persuasion from my new fiancé (he proposed during treatment!) I approached the local Maggie’s centre which, conveniently for me was just down the road and referred myself for counselling.

Slowly things have got brighter, I started to come out of the menopause which even the consultants seemed surprised about. I am now one-year cancer free, have got married, my periods have come back, and we are now looking into our fertility options. Something a year ago did not feel remotely possible. It’s taken me a long time to process what has happened, but I jumped at the chance to share my story to provide some hope that there are positive stories out there and to highlight that ovarian cancer awareness makes a difference to women’s lives and their outcomes.

I was incredibly lucky that my cancer was caught early which gave us more options. I am proud that we fought hard as a couple to get the treatment pathway that was right for us and fingers crossed it has paid off. I can’t stress the importance of women (and men) having an awareness of their bodies and to dispel the myth that ovarian cancer just affects older women. The Eve Appeal does such great work in raising awareness of ovarian and other gynaecological cancers, I just hope that by sharing my story it will go some way to help.

If you want to join Sophie and Make Change Happen this Ovarian Cancer Awareness Month, you can sign up to hold a Virtual Time for Tea party this March.

Sign Up
﻿
Coronavirus pandemic: We’re experiencing a substantial increase in calls to our Ask Eve cancer information service. You can make sure women suffering with symptoms or who are facing a cancer diagnosis continue to get the answers and support they need by making a donation today.
Donate Now
This website uses cookies to improve your experience. We'll assume you're ok with this, but you can opt-out if you wish.Accept Read More
Privacy & Cookies Policy
Necessary Always Enabled