I was 24 when I received my letter for my first cervical screening appointment in March 2020, just a week or so into the very first lockdown. At the time we weren’t expecting it to go on for as long as it did, so I called my doctors expecting to book my appointment for a few weeks but instead got told that due to the lockdown they weren’t doing any appointments for things like that and to call back in a few months. To be honest I wasn’t worried, I had no symptoms so I just figured I’d have my appointment when everything returned to normal.

As the three week lockdown turned to months I rang the doctors again to see when they thought it would be likely for cervical screening appointments to resume; again I was told to call back in a few month. Finally, I had my appointment booked in for the 25th August 2020. The nurse was nothing but lovely, explained how the cervical screening test worked, what they looked for, what to expect etc. It took a couple of minutes, after it was done the nurse explained to me that if everything was okay, I’d receive a letter saying to come back in 3 years. If it wasn’t and they needed to check further they would look at the cells to see if they were abnormal and if further investigation may be needed, but not to worry. 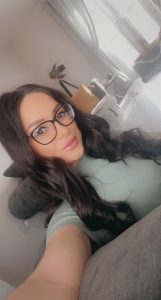 A few weeks after my appointment and a couple of days before my 25th birthday I received my letter to say that the results of my cervical screening show that I was HPV positive and after further investigation showed I had abnormal cells (moderate dyskaryosis). At this point I went into a panic and I felt like I just knew that it was going to be more serious. Like family do, my parents and boyfriend tried to reassure me that it’ll be fine and not to worry, but I can’t explain it, I just already knew what it was. The next day the nurse who carried out my screen rang to ask me how I was, we talked about how it was a shock with it been my first one and only just turning 25. Again, she said to try and not worry, but that’s easier said than done.

My letter said that I would be invited for a colposcopy. There was a bit of confusion over my appointment, I never received the invite, but got a phone call saying I’d missed my appointment. I then got told it would be another two weeks for my appointment after already waiting two weeks. I started to panic and explained how concerned I was and thankfully was able to get an appointment for a couple of days later.

I went for my colposcopy on 24th September 2020. I took my mum but due to COVID she wasn’t able to come in with me. My Gynae Oncology Nurse Specialist was Karen (who is absolutely lovely), we spoke about why I was here, what their job was, what they were looking for and what to expect today. During the appointment it was decided that I would have LLETZ treatment to remove the abnormal cells, and also to check if it was cancer. I won’t lie, after having the LLETZ treatment it wasn’t pretty, it was like having a period for six weeks, and then not being allowed a bath or to use tampons (BUT with what I know now, I wouldn’t think twice about having it again.)

On Friday 23rd October, almost a month after my first LLETZ treatment, I got a phone call asking me to come in to discuss my results, at this point I crumbled. I started crying before I’d even got off the phone. In my head I felt like I’d already heard the bad news. They said I could bring someone to my appointment, with everything going on and nobody else usually allowed to join, I figured it couldn’t be good news.

My mum came with me that following Monday, 26th October 2020, where I met with a doctor and Karen, the nurse who had done my colposcopy. They told me that they had tested the cells and it was very early cervical cancer (stage 1a), but this is where the story thankfully takes a turn for the better. They were pretty confident that they had removed all the cancer in my LLETZ treatment.

It was such a strange experience, I heard the word cancer and started crying, so did my mum, but the more information they told me the more I started to understand I was lucky. It was stage 1A, the lowest grade possible, it had been caught so early that I didn’t need any treatments like chemo/radiotherapy. I did need a second LLETZ procedure just to confirm that they had removed all the cancer and any other pre-cancerous cells. I had my 2nd LLETZ on 12th November 2020 and on the 30th November I went back to the hospital for my second results meeting to hear the amazing news that it was all gone, no more cancer! The relief was just amazing, for me, my boyfriend and family.

I have to go for six monthly check-ups for the next year or two, and then once a year for 10 years to make sure nothing changes and fingers crossed it doesn’t!

I can’t thank Karen (and her team) enough, they made me feel so comfortable and spent so much time answering all of my questions and concerns. If I’d had the attitude that I’m young, I’ve got no symptoms so I don’t need a cervical screening test yet and waited, this would be a very different story. It could have spread too far to do anything or at the very least meant more intense treatment or a hysterectomy (this was my biggest fear, I hadn’t had babies yet and I couldn’t image that option getting taken away from me).

Cervical screenings save your life, it’s as simple as that. I would just encourage anyone who can go for their appointment to go.

For information on cervical screening and tips for your appointment, click here.